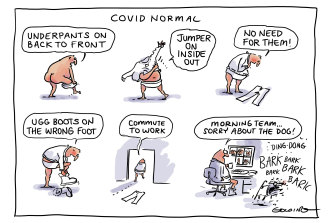 To submit a letter to The Age, email [email protected] Please include your home address and telephone number.

You write in your editorial (Sunday Age, 30/8) that we must do all we can to repay the year 12 class of 2020 for life experiences foregone in the fight against the coronavirus. One fears that the youth of today will be called upon to make more sacrifices in the future.

They have their adult lives in front of them. They deserve to be free to live them to the full. Instead, they are faced by reports of unseasonable droughts and flooding rains, hurricanes and bushfires of unprecedented ferocity, dying coral reefs and eroding coastlines. It is time that we, their parents and grandparents, took up our share of the struggle to make the urgent changes needed to get greenhouse gas emissions down to zero.
John Gare, Kew East

Rising to the challenge

Your editorial paints such a doom and gloom picture for the class of 2020. Let us not thrust our battle weary, adult views of the world on to this remarkable group of young people. To paraphrase Winston Churchill, ‘‘this will be their finest hour’’. This cohort is resilient, adept and agile. They have risen to the challenge and learnt valuable skills that will benefit them in their future lives. Let us not underestimate the year 12 class of 2020.
Julie Perry, Highton

Police handcuffing a pregnant woman in her home ‘‘for their safety and the safety of the person who is under arrest’’ (The Age, 4/9). Police ‘‘spear tackling’’ a cyclist to the ground for not having his bike lights on while riding to work at dawn (The Age, 5/9). This is getting out of control. Even good people can lose their moral compass when they are given too much power.
Andy Moffat, Williamstown

Alan Attwood’s column (Sunday Age, 30/8) sees abuse in AFL football as something from the past. He suggests football has moved on. I would like to think that was true. In the same edition, however, we find a senior AFL coach urging his players to hate members of the other team – ‘‘Teague brings hard edge’’ (Sport, 30/8). What sort of message is this giving to the supporters, let alone any kids getting involved in the sport?
Chris Watson, Ivanhoe

I could not believe what I read: a senior AFL coach said ‘‘I hated every team I played’’ and ‘‘Whoever is wearing that opposition jumper, we want to hate them’’. I am a migrant and I love Aussie Rules. It is certainly not for the faint-hearted. Players give as much as they get. They are as tough as nails. But to advocate hatred and ‘‘killing’’ the opposition is not to be encouraged, especially for the younger players who should be taught true sportsmanship.
Elwyn Bourbon, Springvale

This national cabinet looks more like Play School – ‘‘Premiers shatter cabinet consensus’’ (The Age, 5/9). Come on kids, today we’re going to sing The Wheels on the Bus Go Round and Round, followed by an endless game of Pass The Parcel of Responsibility – ‘‘It’s not me, it’s him/her/them’’. Then we will end with Musical Borders, the last one with a closed border gets to secede from the rest of Australia.
Richard Jones, Frankston South

Faith in one message

How can the answer be the same? Early this year, Josh Frydenberg boasted he was budgeting for a surplus and so he decided that the rich needed a tax cut. Now we are in recession his solution is to give the rich a tax cut. Go figure.
Pauline Ashton, Maribyrnong

The humans had a choice about whether they were on the cattle ship that capsized en route from New Zealand to China (The Age, 5/9). Tragically the cattle did not. Ban live exports.
Christopher Monie, Wendouree

I strongly disagree with the Grattan Institute’s health policy expert Stephen Duckett when he says Victoria’s target should be zero daily cases (The Age, 5/9). Death lurks everywhere: in bed, in the bath, in the kitchen, on the footpath and on the road. To keep the world locked down until there are no cases makes as much sense as advising everyone to get into a six foot by two sealed box and be really safe.
Steven Scheller, Benalla

Checking the daily coronavirus case numbers is a bit like checking your weight each day. Depending on whether the number has gone up or down, it sets your mood for the day and is therefore generally not an advisable thing to do.
Jacqui Bingeman, Kew

Being in stage four lockdown is like being in a class detention after school. You have to behave to get out and just when the detention is nearly up, a few of the class misbehave and the teacher starts the clock again. Protesters and conspiracy theorists, shut up, so we can get out and go back to work.
Steve Jenkins, Parkdale

So, no one knew who was in charge of the hotel quarantine fiasco (The Age, 5/9) and no one is to blame for the aged care crisis. In fact, Scott Morrison seeks praise for the handling of this calamity. And no criminal charges have been recommended against any police in barrister Nicola Gobbo’s activities as a police informer (The Age, 5/9). So no one did anything wrong, did they? Let us simply not have these time and money-wasting inquiries.
Peter Cash, Wendouree